Yesterday marked a banner day for the American political system. Former VP Biden announced that Senator Kamala Harris, of California, will be his running mate for the general election in November. During the original primary season (remember way back in mid-2019 when there were 27 candidates?) I was on board for Senator Harris to be the nominee. At the time, I was hoping for a Harris/Warren ticket, but in December of 2019 my hopes were dashed when Senator Harris dropped out of the race due to low fundraising numbers.

This was all before COVID-19 hit our country, hard. Before the protests for social justice and antiracist activity reignited by the deaths of Ahmad Arbery, Breonna Taylor (arrest the cops!), and George Floyd. Although it was not before the mess that is the current resident of the White House, it was before a great deal of additional damage that the “POTUS” has done in the name of White Supremacy.

When Senator Harris dropped out of the race, I was disheartened, but I quickly shifted my focus to Senator Warren, in the hopes that she could become the nominee and then pick Senator Harris as her running mate. Again – my hopes were dashed when, after the South Carolina primary, it was evident that VP Biden was most likely going to be the candidate of choice.

I wondered, “is this really all we are, America? Is this the only type of person that we can see in that office? Do we really not have more imagination? We had 8 years of a Black man in the white house, but now we cannot even see that again? Seriously?” I knew that I would go to the polls on November 3rd, hold my breath, and pull the lever for Biden, but I wasn’t happy about it still, in 2020, being my only choice.

And then yesterday happened.

Having Senator Harris on the ticket will make it a lot easier for me to pull the lever. After many months of looking more deeply into the candidates, I have come up with some reasons why Senator Harris would not, now, be my first choice, but she is certainly better than someone like Senator Klobuchar or Governor Whitmer. They are not bad people (there are plenty of those on the right), but they are also not people who will have the interests of Black people, and especially Black women, in mind while governing. Being White women gives them the privilege that would allow them to overlook important issues in the Black community that they will never affect them personally. So – Senator Harris is a good choice.

What I hope, more than anything, is that Senator Harris can overcome her ‘cop’ past and infuse some much needed change into the system through legislative efforts to defund police departments and redistribute wealth. Is that a tall order? Is that too much to ask? I think we can all see that these changes are needed. America needs to grapple with our disgusting, racist, sexist past and make real change to move forward. My hope is that Senator Harris can push for some new policies to make up for some of the crap that she was on board with (SESTA/FOSTA) in the past. She can move Biden in the direction of more progressive politics. We will see if it happens.

In the meantime – we all need to vote. Most especially because the down ballot races are essential this year. In order to make true change in America, we need to turn the Senate and remove McConnell from standing in the way of justice and equity. We need to make change at the local level to rise up to the rest of the political system. We need to vote out the old, stodgy, conservative White dudes that have been working against social justice and infuse new life into the system. Without change at all levels of government, change for the people of America will be impossible to achieve.

If you have yet to register, please visit vote.gov and get that done today! Seriously! Click that link and make it happen right now! After you register, visit usa.gov to research mail in voting in your State. If you are feeling uneasy about voting in person, you may have the right to vote by mail. Everyone who is eligible to vote this year needs to do so. Lives LITERALLY depend on it.

Hope to see some wonderful, positive, forward-moving results for our country in November. Otherwise – well – I don’t even want to think about the alternative. Biden/Harris or the end of democracy as we know it. This isn’t hyperbole – it is fact. Get out there and do your civic duty!

At hippiegrrl media we believe that Black Lives Matter, Climate Change is Real, Treaties need to be honoured, Women have autonomy, Love is love is love, No human is illegal, Science=Truth, Unions are essential, and the time for Trans Liberation is now! 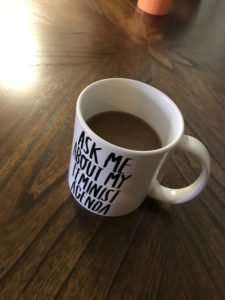